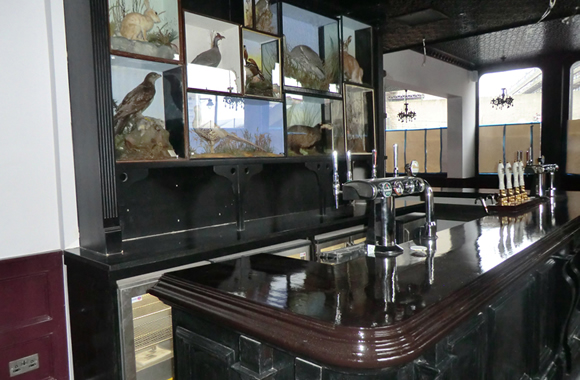 (Photos and text of interview courtesy of Catering Insight magazine)

Hansens is one of the capital’s foremost commercial kitchen installers, generating a huge chunk of its revenue from delivering professional catering projects involving some of the world’s top hotels and restaurant groups.

The latest name on its list of clients is the prestigious Montcalm Hotel based in the heart of the city on the grade II listed site of the former Whitbread Brewery. Hansens has spent the last 10 months working on a dual-pronged installation at the site and was literally in the process of completing the final stages of the second part of the project — and handing it over — as we went to press.

With The Montcalm undergoing a refurbishment on a grand scale last year, Hansens was initially drafted in to fit out the Chiswell Street Dining Rooms, a 150-seat restaurant operated by ETM Group that serves guests from the hotel as well as walk-in customers.

Hansens had a limited timeframe to complete the £200,000 kitchen installation ahead of the venue’s opening and managing director, Peter Hansen, admits the adrenaline rush kicked in immediately. “We got the order on the basis that we could turn it round in four weeks,” he says. “The hotel has about 240 bedrooms and with the refurbishment taking place at the same time there were something like 700 contractors on site.”

As the Chiswell Street Dining Rooms project neared completion, Hansens began design work on The Jugged Hare — a pub and restaurant located on the far corner of Chiswell Street and Silk Street but still set within the site.

The Jugged Hare’s exterior emits all the signals of a traditional English pub, but inside visitors are greeted by a plush public bar area and adjoining dining room featuring an open kitchen. Also operated by the ETM Group, the venue intends to position itself as the place to head for seasonal meat and game, including the very dish the pub takes its name from.

The pub contains two core cooking areas — a downstairs location that will serve an adjacent private function room and act as a prep kitchen for the main dining area — and an open kitchen that contains the venue’s pièce de résistance: an eight-spit rotisserie custom-built in France by Rotisol and supplied by UK equipment distributor Jestic. 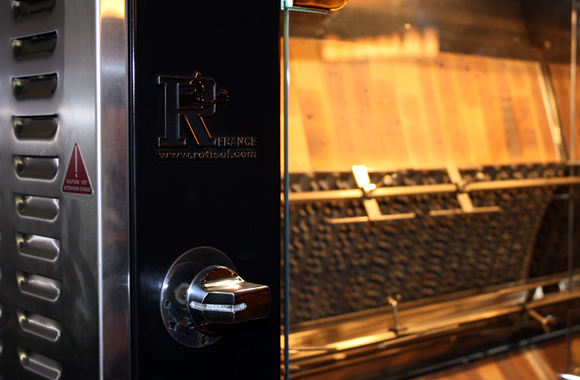 “It is certainly the biggest rotisserie we have ever supplied in our life — it is a stunning unit,” says Hansen. “We originally supplied a five-spit unit that had a volume capacity of 25 to 30 birds but it was decided that a bigger one was needed. The eight-spit can do between 56 and 64 birds, so it is effectively double the size.”

With a budget exceeding £200,000 to work with, Hansens set about specifying equipment to meet the pub’s menu and ensure it is able to turn over enough dishes during peak times.

Hansen says: “It was always going to be an open display kitchen at the front, hence the reason that the rotisserie is the focal point. There are also little back-up prep areas where we’ve installed things like a Rational combi, and a lot of Blue Seal cooking equipment has been put in. There is a fryer, six burner range, pasta cooker and a solid top. We have also done all the under counter and back bar work, and put the refrigeration and glasswashers in.”

One stand-out feature of the project is a Williams walk-in cold room that has been specially lined in order to maintain an optimum temperature balance.

“This area will serve as a game room — it is where they are going to hang the pheasant, jugged hares and other game,” says Hansen. “There was some complexity involved with how we did it as it was literally an open space. We’ve had to put a double glazed window in there and zone it in a special way using a heavy stainless steel screen. Although the lights go out when the doors are shut, people can see into the cold room from outside at other times.”

One of the biggest challenges for Hansens was planning the logistics of the equipment delivery and installation schedules given the amount of building work taking place on the site at the same time.

“It has been a job that has moved very fast so we’ve almost had to have somebody there every day,” reveals Hansen. “Bearing in mind you are in the heart of the city with all the traffic restrictions, double yellow lines and HGV issues, there was one day where we had more or less seven pre-timed deliveries. We had the rotisserie and all the fabrication work arriving, as well as equipment from Williams, Blue Seal and Hobart!”

Given the project only kicked into gear shortly before Christmas, Hansen insists the highlight of the deal has been how quickly it has been able to get the kitchen areas installed.

“I suppose one of the things that we are proud of is the timescale in which it was actually completed and the fact that we were also working in a grade II listed building,” he says.

It is also another prestigious name to add to the list of projects Hansens has carried out in the capital. 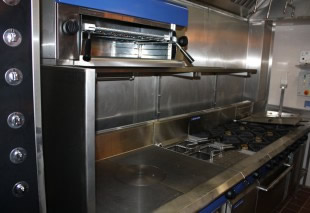 The giant eight-spit rotisserie serves as a striking centrepiece in the main kitchen, showcasing the British produce that The Jugged Hare will be offering customers. Its attractive appearance helps to set the kitchen off and will undoubtedly whet customers’ appetite as they watch the chefs in action, while from a practical point of view it is engineered to be easy to use and simple to clean. With a volume capacity exceeding 56 birds, the unit is well-equipped to handle big orders at the busiest of times.

Blue Seal equipment forms the backbone of The Jugged Hare’s main cooking facilities, providing the operator with a six burner range and solid top, as well as a twin pan electric fryer and electric pasta cooker. The power and performance of the suite will be put to the test on a daily basis given the location’s proximity to one of the city’s largest office districts, but with a 7 cubic foot oven featuring five rack positions for maximum versatility and powerful gas burners, the range is well-placed to cope.

Cold rooms are normally buried away at the back of a catering operation where they are hidden from prying eyes, but this Williams-based facility is designed to be the opposite. Diners in certain parts of the pub will be able to see the ageing process of meat or hanging game by peering through a special window that reveals what’s inside. The temperature-regulated facility might have been spec’d for its practicality but it has all the hallmarks of being a novel part of the pub’s design.

Spec sheet: Equipment used in the kitchen installation project at The Jugged Hare, include: